Your Truly Restful Getaway! One mile from Sherando Lake
Home » Our Story

A NEW ERA FOR CABIN CREEKWOOD

Big changes in 2019-2020 as the Horsts were ready for a change and placed Cabin Creekwood up for sale. Five of the cabins were sold to private owners while four were sold to be continued as Cabin Creekwood Rentals.  Adam Stanley bought Mountainwood, Logwood, Oakwood, and Barnwood to continue the cabin rentals in the Shirk-Horst tradition.

Adam hails from Wisconsin and have vast experience in the lodging industry.  He owns two hostels for Appalachian Trail hikers and several AirBnB properties.  He is excited to welcome returning and new guests to Cabin Creekwood!

Cabin Creekwood was started in 1982 with one cabin, the original “Cabin Creekwood.” This hunting cabin was purchased by Stan and Mary Jane Shirk, who began renting it out to vacationers as a means of raising money to support missions. Over time, as people began to find out about this unique opportunity to enjoy the Blue Ridge Mountains, the cabin was filled much near to capacity. The Shirks then decided to build another cabin, called Rockwood. A few years later, Mountainwood was added. Then an opportunity came to lease a couple of cabins.

In 1995, the Shirks decided that Cabin Creekwood was too large of a business for them to continue as a part time occupation, and offered to sell it to their daughter and son-in-law, Stan and Debbie Horst. This came at a time of job transition for Stan, so the Horsts evaluated the opportunity and deci 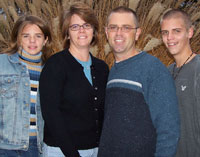 ded to pursue it if they could expand it large enough to be a full-time business. This was when the decision was made to purchase the property that now contains Oakwood, Logwood, and Barnwood.

For 19 years, Stan and Deb continued to run Cabin Creekwood, along with the assistance of their two children, Kendall and Jordan. Stan and Mary Jane Shirk also helped out when things got extra busy, or when the Horst family took a vacation. In addition to the family members, the Horsts depended on several part-time helpers to take care of cleaning and some of the maintenance.

In 2014 came the next big transition. Julia McCarthy came on board to take care of the day-to-day operations. Julia, along with her two girls, managed the properties and interacted with guests.

Together, all of us look forward to hosting you at Cabin Creekwood, “Your Truly Restful Getaway!”