Your Truly Restful Getaway! One mile from Sherando Lake
Home » Appomattox Courthouse – Revisit the End of the Civil War 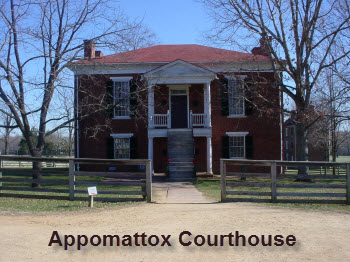 Long before General Lee surrendered himself at the Appomattox Courthouse, signaling the end of the Civil War, this land was already pumped full of intriguing history. Located an hour and twenty minutes away from Cabin Creekwood, this attraction is further away in distance than we typically recommend guests to travel, but what rests at the end of the scenic route is well worth the journey! Despite its distance, it’s full of history that brings the buildings, and the surrounding 1,700 acres of land to life. For it’s not only the courthouse and the Civil War that make this land famous, but years and years of potent American history seeped into the soil. Many of the artifacts have never even been moved, available for you to witness first hand, allowing a deeper understanding of our countries’ earliest years.

In the 1860’s, filled with worries over the war, Wilmer McLean decided to move his family into what is now known as the McLean house, a home tucked in the Appomattox Court House Village. Not only is this where McLean lived, but it was also where top-secret business got taken care of—in fact, the army generals found this a comfortable and safe place to all come together for meetings. The final meeting, in which Lee would sign the documents to officially surrender, was even held at McLean’s home—a choice completely up to General Lee, as he could have picked anywhere for the affair.

Today, the McLean House stands open for tour, including the slave quarters, an exterior kitchen, and even an original outhouse. Much of the furniture on display in the actual meeting room is original, while only some has been recreated. It’s the little things that really stand out, such as the pencil used by General Lee to adjust and sign the documents after he surrendered himself, or the diaries obtained from soldiers that ventured to this site in 1865. While the pencil is always on display, you can hear the diary entries in the park’s 70-seat theater, where the presentation starts itself over every 30 minutes. 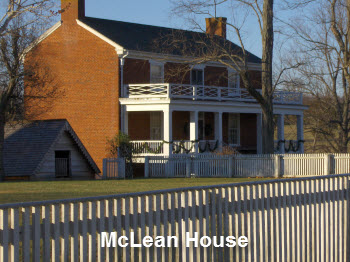 A favorite among many that visit are the actors and actresses dressed up as people from the 1860’s. Spread out over the property, you never know who you might meet! These well-educated individuals are available for questions, clarification, and guidance—all while remaining in character. It truly feels like you are talking to someone from this time period. To make the place more vibrant, live plays are performed throughout the year, but mainly in the summer months. At these reenactments, actors dress, talk, and act like those that lived on this land, and changed history on this land, back in the 1860’s. As many people died, fought, won, and lost, there are a number of stories that have been passed down through the years—each one more touching than the next. Try to uncover as many as you can!

There are a number of ways to tour the facilities; guided tours are available at certain times of the year, although for the most part people give themselves a tour of the place. No need to worry, you won’t be left in the dark, there are numerous ongoing functions to give you a great understanding of the culture and people once present here. This allows you to move through the attractions at your own pace; taking in all of the artifacts the grounds are laden with. The best part for all parents is that this is a kid-friendly park, giving kids far more than just a glimpse of the past in a way that is relatable and fun to them.

Just before General Lee surrendered, there was a bloody battle on the courthouse grounds—although it is far from the only fight waged on this site. The blood of those that fought for America, one way or another, creates a mystical feeling over the place—one that leaves visitors wondering how anyone could skip out on seeing such an important piece of the past, something so perfectly preserved.

To plan your next trip, visit the official Appomattox Courthouse website.