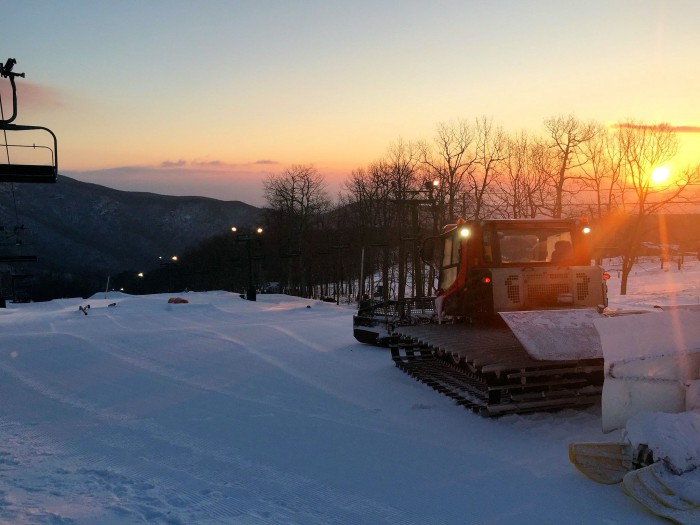 While Fox News’s Brett Baier likes Whitetail for a quick day of skiing, he prefers Virginia’s Wintergreen Resort for a weekend.

“They have a new section that is their answer to the bowls out west,” he says. “It’s called Outer Limits.” The expert slope offers 2,000 feet of steep, exciting terrain. “And at the end of the day,” Baier adds, “you can get a massage at the spa.”

Wintergreen, near Charlottesville, has a lodge, four sit-down restaurants, shops, and nice mountainside condos and houses for rent. During the winter it’s possible to ski the mountain and golf in the valley on the same day because the Blue Ridge mountaintop, at 3,800 feet, is 15 degrees cooler than the valley. As if a skier would golf when there are snow-covered slopes.

Update (2014): The resort has a restaurant, Edge, which features salvaged-wood decor and beamed ceilings. At the Market at Wintergreen you’ll find sandwiches, salads, and local coffee. The resort has also added extra snow guns, so fresh powder can be made more quickly.

The above text and article was taken from: http://www.washingtonian.com/2011/12/05/best-places-to-ski-near-dc-va-md/ featuring an article entitled “Best Places to Ski Near DC, VA, & MD” by By Sarah Zlotnick and Melissa Romero on December 5, 2011.  It was updated in 2014 with new information.

Cabin Creekwood invites you and your bests to come up and stay at our resort for a fantastic weekend of skiing at Wintergreen Ski Resort. We are sure that you will love discovering all that Wintergreen has to offer. If Bret Baier loves it – you know it’s great! Bret is the top political anchor on the Fox News Channel and a lover of all things skiing.

We offer 9 cabins in Virginia’s scenic Shenandoah Valley. We offer an escape away from it all. Convenient from Washington D.C. and other cities in the southeast.