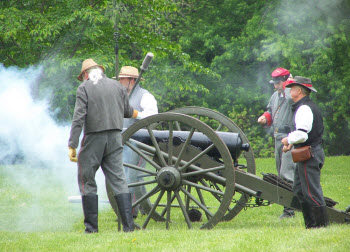 Only an hour from Cabin Creekwood, the town of Buchanan will be hosting its 6th annual Buchanan Civil War History Weekend the weekend of April 26th 2013. This event brings to life the events that occurred 150 years ago in an amazing and educational way that you and your entire family will enjoy. All the sights, sounds, and details from the Civil War era will be re-created for you to explore, touch, and see.

The weekend is full of activities starting Friday with school field trips being guided through living history camps at the town park, interacting with Civil War re-enactors, and getting a taste for what life was like during this critical time in American history. Encampments and displays will be set up around the downtown area and public park, giving students and other visitors an appreciation for what life was like at home.  These will include displays on cooking and how food was prepared during that time. Also, weapons and ammunition will be on display, including how bullets were made, a process that has continued to improve to this day, making firearms much more accurate.

The Civil War was much more than just the soldiers and the battles; it also had a tremendous impact on the families. Members of The United Daughters of the Confederacy will be present to make living history presentations and discuss various topics that include clothing, quilting, knitting, food shortages and substitutes, and many other subjects that were important at that time. 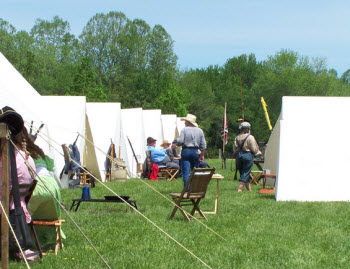 Saturday marks the official start to the weekend with the opening ceremonies starting at 10:00 am in front of the Botetourt Artillery Monument on Main Street next to the Presbyterian Church. Re-created Civil War camps will be open all day for visitors to explore, learn, and discover how life was for the family and for the soldier in that time. Civil War movies will be shown at the Buchanan Theatre including “Hunter’s Raid,” and many guest speakers will be giving talks at the public library. Expect to see fully costumed re-enactors on the streets in downtown as well as cavalry soldiers on horseback. The re-enactment of a downtown street battle will be on full display as Confederates battle Union forces under the command of Federal General David Hunter. In addition to the street battle there will also be an era-themed fashion show, opportunities to see other goods and works of art created by era-themed artists. Also, don’t miss your chance to participate in a fully costumed Confederate camp dance!

Sunday – Church and the Battle of Buchanan

Take advantage of the opportunity to sit through an era-themed church service, delivered by Reverend Alan Farley, as he re-enacts a typical Confederate army church service tailored to the troops. Accompanied by his wife who plays organ at the service as well as his son who portrays a farrier, you will have the opportunity to see the role religion played for troops during the Civil War. Following the service later that day, a full re-enactment of the Battle of Buchanan will be performed.  Here the cannons roar, the rifles crack, and see the smoke billow as the Union troops gathered on the north bank of the James River battle the Confederate troops who are trying to delay the arrival of Hunter into Buchanan. Confederate troops, under the leadership of McCausland, burned the covered bridge over the James River in an effort to delay Hunter’s forces. Unfortunately, the bridge fire spread, resulting in close to thirty other buildings being destroyed by the spreading fire.

You certainly do not want to miss the chance to see a full re-enactment of various Civil War battles as well as era-themed displays. With activities for adults and children of all ages, you will find yourself amazed at the lifestyle and events that transpired during this critical moment in American history. For more information, visit the event’s website at this link.