Your Truly Restful Getaway! One mile from Sherando Lake
Home » Natural Bridge – History and Nature Together in One Place 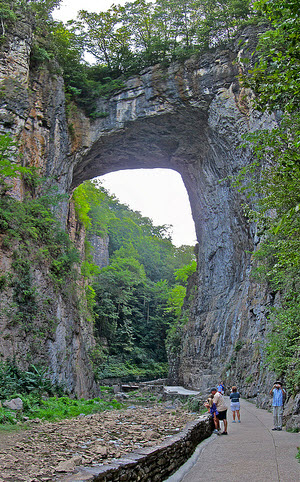 Natural Bridge is one of Virginia’s most cherished and prized natural monuments, it has been said to be one of the Seven Natural Wonders of the world. The naturally formed limestone crossing was declared as holy land by early Native-Americans; it has been an inspiration to authors, painters, presidents and other historical figures. For over 250 years it has been visited by many thousands of people and yet the bridge is nearly in the same state as when it was first discovered. It has remained in the protection of private owners since 1774. The preservation of Natural Bridge is a testament to the stewardship of its diligent caretakers. After two and a half centuries, the bridge is still an impressive, timeless attraction you do not want to miss.

Before European settlers arrived, the Monacan Indians were one of the tribes that inhabited the land that is now Virginia. Monacan folklore accounts the tribe’s spiritual encounter at a natural bridge many centuries ago. It is said that the Monacans, fleeing from enemies, came upon a large canyon, with no means to cross it. The Monacans prayed to the “Great Spirit” for help, and then they saw the Natural Bridge and crossed over it to safety. The bridge became a holy place for the Indians who called it the “Great Path”.

Natural bridge is the remains of a large cavern that was formed by the flowing waters of Cedar Creek, a tributary of the James River. The ancient limestone cavern collapsed leaving only a strong section that is now Natural Bridge. The creek, believed to have been 200 feet higher at some point, is responsible for washing away much of the collapsed cavern and carving out Cedar Creek Canyon. The bridge is irregularly shaped with different measurements on either side, 205 feet on the north side and 270 feet on the south side. The dimensions average about 55 feet higher than Niagara Falls. The bridge itself measures 50 feet thick, 100 feet wide and spans 90 feet between the walls.

It is believed that George Washington surveyed the site in 1750, on behalf of Lord Thomas Fairfax. The initials “G.W.” are carved 23 feet up the bridge wall and believed to be engraved by George Washington when he surveyed the Natural Bridge. In 1927 a large stone was found near the site, it bore a surveyor’s cross and the initials “G.W.”, this has been accepted by historians as proof of Washington’s visit to the site.

Thomas Jefferson also had close ties to Natural Bridge. Jefferson was enamored with the Virginia Piedmont region. As he traversed the state he took detailed notes which later became his 1785 book, Notes on the State of Virginia. On July 5, 1774 Jefferson bought 157 acres that included the Natural Bridge. Jefferson already had his first home, Monticello located 80 miles north in Charlottesville, and his second home in Lynchburg which was 40 miles from the natural monument; he then had a third home constructed close to the rock bridge. The home Jefferson built near the bridge in 1803 was a modest two room log cabin with a room for guests. The former president kept a logbook to record the visitors he invited. Among the guests were John Marshall, James Monroe, Henry Clay, Sam Houston, Daniel Boone, Andrew Jackson, Martin Van Buren, and Thomas Hart. Thomas Jefferson wished to share the Natural Bridge with the world. Jefferson believed that if the site became a government park that it would belong to the people but no one would take responsibility for it. By purchasing the land the bridge sits on, he intended to take good care of it for future generations to enjoy.

Natural Bridge has been an inspiration to more than just former presidents. Many mid-nineteenth century artists chose Natural Bridge as the subject of their paintings. Herman Melville made a reference to the bridge in his 1851 book Moby Dick, “…From the water; for an instant his whole marbleized body formed an arch, like Virginia’s Natural Bridge…” Natural bridge is a truly underrated wonder. There are other well preserved wonders at Natural Bridge, from the ancient 1,600 year old arborvitae tree, to the 347 feet deep Natural Bridge Caverns. Natural Bridge is worth every effort to visit. Located about 45 minutes south of Cabin Creekwood, just off of I-81, Natural Bridge is right under the US Highway 11. A part of US-11 actually crosses over the canyon on the bridge. From the highway, you won’t even know you crossed over the natural bridge and from below the bridge, you can’t hear any of the traffic noise, it’s a true little pocket of paradise. The second you turn the corner and see the bridge in front of you, you will marvel at the sight of it and won’t be disappointed.