Your Truly Restful Getaway! One mile from Sherando Lake
Home » On Site Art Studio Closes its Doors, but the Gallery Remains Open 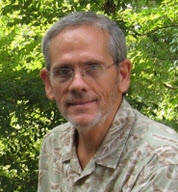 Our on-site gallery of WoodArt by Stan Shirk will remain open, but the studio is closing. Stan has been doing WoodArt for a number of years, but his tremors have progressed to the point that it is nearly impossible to do the fine work that he is known for. I’ll let him tell the story.

I was diagnosed with ET (Essential Tremors) in 2006.

One day I realized I could still draw a fairly accurate line by holding a small router in both hands. It was a God thing! I could engrave pictures in wood to occupy myself, in spite of my handicap, as an artistic expression like I used to do with paint and brush for a hobby. But by 2009 the tremors were so bad I couldn’t even sign my name, holding a pen in both hands, much less engrave any pictures. So I had to stop.

Then I learned about Deep Brain Stimulation at the UVA Medical Center. By putting electrodes deep into both sides of my brain, installing a sub-dermis clavicle battery pack and charging my brain with 5 volts of electricity I miraculously could engrave again! For the next three years I turned out about 50 engravings a year, held three art shows annually and even opened an art gallery in 2012. 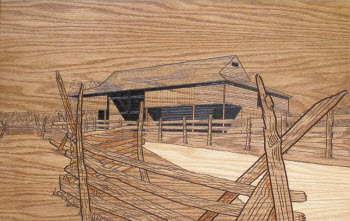 My tremors are now getting worse, to the point that the deep brain stimulation no longer controls them sufficiently. I am very sorry to announce that I have again stopped doing my wood engravings that some of you at Cabin Creekwood have come to enjoy. Five volts are just not enough anymore and it can’t be increased. Life happens!

But my Gallery is still open in the basement of Cabin Edgewood with my last 50 pieces on display and for sale. Also there are seven pictures of the cabins still on hand at the Cabin Creekwood office.

I have been inspired to do old log and stone buildings of the Blue Ridge such as mills, covered bridges and stone arches.

Come by to see me the next time you’re at Cabin Creekwood and save on the commission. Or if you can’t come by just go to http://www.fineartamerica.com/profiles/stan-shirk.html and double click on the picture you like. You’ll also notice that you can still order prints and greeting cards of my work at a reduced price.