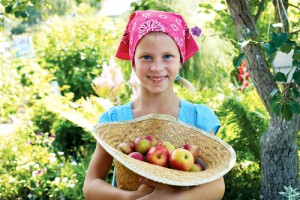 There is nothing sweeter than freshly picked produce that you’ve picked by hand and the fun that you can have by visiting a local orchard.  Carter Mountain Orchard is only a thirty minute drive from our cabins for rent in VA at Cabin Creekwood.  Visitors love stopping by this family owned farm to pick their own produce. They grow apples, peaches, strawberries, sweet cherries, pumpkins, plums, apricots, and nectarines. You can pick your own peaches in the summer months during the time period of late June to mid September, and you can pick your own apples mid August through the end of November. The month of November is a huge month for the apple picking and Carter Mountain Orchard celebrates the Apple Harvest for the entire month.

The orchard is operated by the Chiles Family and it is a multi-generational venture. The first generation began the Orchard over 100 years ago and their first produce stand was a tiny roadside stand that sold fresh produce to neighbors and families passing through the area. Since then, the orchards have grown and expanded and you’ll likely see at different points in time members of the third, fourth and fifth generations of the family planting, tending to the crops, pruning and picking. The ‘Pick Your Own’ Orchard became a hit after a hard freeze killed many of the crops in the orchard in 1974. There was not enough fruit left to hire anyone to handle. To counter the devastating frost, the family decided to open up the orchard to their neighbors, friends and anyone visiting the area to Pick your Own fruit, the fruit that was left after the freeze hit. They never expected the pick your own to last past the first season or be nearly as popular as it became and is still today.

Those that love and appreciate the history in our Virginia Mountains, will also find the history of the land that the Carter Mountain Orchard sits on interesting. The land was first granted to the Honorable John Carter, Esquire in 1729 along with some 9,000 other acres of surrounding land. Carter served as the Secretary of the Colony of Virginia and died in 1742, leaving the land to his son Edward. Edward Carter went on to represent Albemarle County in the House of Burgesses from 1767 to 1769 and in the House of Delegates from 1788 to 1792. In 1771, Thomas Jefferson gained ownership of part of Carter Mountain, where the orchard lands sit, in exchange for legal services for Edward Carter. There is no mention of why Edward required Jefferson’s legal services. The land that Jefferson acquired was and is adjacent to Monticello, his primary home place. The Chiles Family has been operated the orchard since the 70’s, and they purchased the orchard lands in 1985.

Cabin Creekwood is a place where families go to create memories that last a lifetime. A wholesome, family owned and operated Virginia mountain resort located near Sherando Lake, Cabin Creekwood features  4cabin rentals in Virginia. Large groups love to stay with us because if you book early enough you can book several rentals from our resort, or all of them and stay together in the Virginia Mountains.