Your Truly Restful Getaway! One mile from Sherando Lake
Home » Staunton Summer Concert Series are a Staple of Summer in the Valley 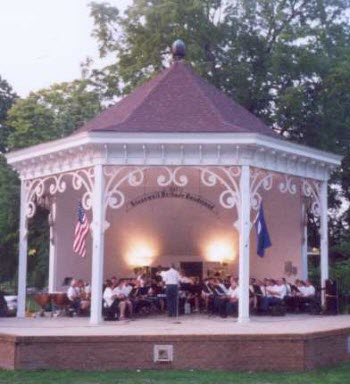 How will you and your family spend the extra hours of daylight this summer? The Stonewall Brigade Bandstand in Staunton’s Gypsy Hill Park will be an evening hot spot. There will be two concert series, free to the public, and held each week during the summer. The music will play at the bandstand rain or shine. Permanent bench seating is available in front of the bandstand, but it is encouraged that concert-goers bring lawn chairs or blankets, as bench seats are limited. This year the newly dedicated “Bob Moody” concession stand will sell refreshments during the summer concert series.

Monday evenings at 8:00 pm The Stonewall Brigade Band will play at the bandstand from June through August. The Stonewall Brigade Band is the nation’s oldest community band. Depending on the occasion they played for, the band was known before the Civil War as the Mountain Sax Horn Band or Turner’s Silver Cornet Band. There are 120 band members on the active roll ranging in ages from 13 to 84. The band has played for presidents Fillmore, Pierce, Grant, Taft, McKinley, Cleveland, and Wilson. This year marks the 124th year that the Stonewall Brigade band has played in Gypsy Hill Park. To date the concert series is already underway, and each Monday evening will have a different theme. As always the band will play rain or shine, tradition holds that during rainy evenings, the audience will listen to the concert from their cars and honk their horn as applause. The band welcomes the audience to email with their favorite songs performed during the series for a “best of” concert at the end of the season.

In the months of July and August the bandstand will host the Jazz in the Park concert series, every Thursday evening at 8:00 pm. The Rotary club of Staunton-Augusta sponsors this summer concert series, and also helped to build the new concession stand. The Rotary Club is a non-profit service club of local business owners whose motto is “Service above self”. The jazz in the Park concert series is brought to the public by the Rotary Club as a gift for summer fellowship. The concerts held at the Stonewall Brigade bandstand are great opportunities to spend the evening in the park, enjoying the summer weather with your family.

Gypsy Hill Park is located in the heart of Staunton, about a 20 minute drive west of Cabin Creekwood. For more information check out the links to the following websites: