Your Truly Restful Getaway! One mile from Sherando Lake
Home » Waynesboro, Virginia Talks Back: The History of One Iconic Town 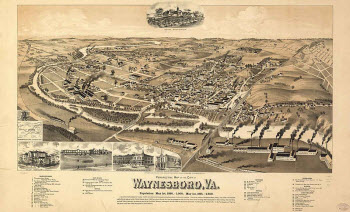 Virginia stands as a prominent face in the history of America. The land that rests here has been trodden over by many people of the past. Thanks to fairly good documentation of local history, much is known about the origins of this great community. For starters, the mountains now dotted with parks and fun activities were once simply known as the frontier land. When the way of travel depended on the horse and wagon, these mounds of mystery were far too tall to venture over. The only well-traveled areas belonged to the flat plains between the mountains. One of these locations is called Rockfish Gap. This valley in particular was a popular pit stop for pioneers heading west

It wasn’t until 1794 that Waynesboro became known as, well, Waynesboro! History tells us that this name came about after an Army General, known as Mad Anthony Wayne, took an important victory at the Battle of Fallen Timbers. It is him the town is said to be named after, and once named it didn’t take long for business to start rolling in.

In 1798, Downtown Waynesboro was sold as a flat plot of land. After this, it would only take a few short years before Virginia recognized this area as legitimate, although it took until 1834 for Waynesboro to be officially incorporated. During this time, the population was slow to grow, remaining stable at under 300 people throughout most of these years. Compare this with the 21,000+ population that resides here today! Talk about knowing everyone’s business–can you imagine the rumors that flew around a town that small? The lack of alcohol available might have decreased the chit chat though, as Waynesboro proudly claimed itself a ‘dry’ town, unlike their competition and bordering town, Basic City. This less conservative and newer town had a slew of bars open to the public. Despite differences, these two cities were eventually combined together as one. Since their joint venture, Waynesboro has continued to grow—slowly accumulating land from Augusta County and finally declaring independence in 1948.

A site for many important victories and happenings in American history, Virginia, and Waynesboro in particular, have never fallen short in terms of famous visitors. In fact, names like Thomas Jefferson and George Washington are commonly tossed around, as these are only 2 of the famous men that spent a considerable amount of time in the Waynesboro area. Today, modern day celebrities such as Hollywood producers are also intrigued by the beauty found here. In recent history, Toy Soldiers and Even Almighty have both had scenes filmed in the area.

On March 2, 1865, the Battle of Waynesboro ended the Civil War and allowed the town to be handed over to General Philip Sheridan. Although this battle was only 20 minutes long, it left marks on our town that are still visible today. In fact, most of Waynesboro’s history has been well preserved. There are 10 places within the city limits that are recognized on the National Registers list of historic locations. Therefore, not only is there a bountiful supply of museums open for tour, but many of these locations are artifacts in themselves. Often the museum is the actual house of a famous name from history, or the site of an iconic battle. Waynesboro, Virginia is so much more than a pretty face; this historic location is also an educational place to visit, full of enchanting delights!