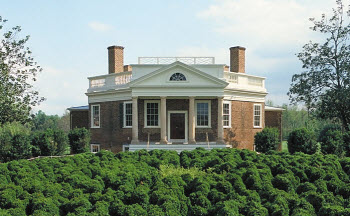 Think of your own favorite getaway location, wherever you go to hide away from the world—you know, be yourself without worrying about others. This place might be a secluded spot somewhere on the beach, or perhaps—if you’re as fortunate as Thomas Jefferson was, it could be a vacation house. Regardless of where it is, this is a special spot that you come alive in. This was the case for Thomas Jefferson back when his Poplar Forest vacation home was the secluded getaway only he and his closest colleagues frequented. Today, this gorgeous and monumental home, set in picturesque scenery, is full to bursting with Jefferson’s personal history. Open to the public and located only 1-½ hours from Cabin Creekwood, you can visit Thomas Jefferson’s exclusive address at Poplar Forest.

A Man of Great Honor

Thomas Jefferson is known for many things in the history books. Along with Founding Father and author of the Declaration of Independence, he is also known as a man of virtue and insightfulness. We all know his name, but few know his true, personal story—such as the fact that he was a proud and well-loved Grandfather, or that he spent much of his life tending to his land. While meeting Jefferson face to face would be impossible today, the creations he crafted on his own land tell a story rare and true. Get inside the mind of the man that helped create this wonderful country.

If Walls Could Talk

While some folks may not know Thomas Jefferson for his architecture and designing abilities, he actually had years of experience in these niches. Therefore, when it came to building this plantation he used a mesh of information gathered over 40+ years of hands-on experience. Due to this personal initiative, everything is planned out perfectly, and there is a story behind every detail in the house. From the size and shape of the windows to the shape of the house itself, nothing was thought up at the last second.

Archaeologists have a fun job—digging up history and piecing together what once was. At Poplar Forest, the archaeology digs never cease because we still have so much to learn. Putting together letters, items, and other remnants of the past grant us a clearer image of Thomas Jefferson’s life, along with the shape of society during America’s earliest years. Often left out of literature is the perspective of slaves. Since many slaves resided at Poplar Forest, archaeologist’s work extra diligently to discover the enslaved perspective on everyday life. Thus far, three separate mini-communities have been located where slaves once lived and worked at the plantation.

The Pursuit of Jefferson

While it was at first a struggle to save these grounds from demolition, one nonprofit fought to save Jefferson’s ideal retreat, and they won! Since being opened to the public, this landmark has sparked attention, gaining the notoriety it deserves. Recently recognized and awarded with the National Trust for Historic Preservation’s Honor Award, the historic site is well on its way to gaining more funding and endorsements, which allow for further research and a greater insight into the past.

Jefferson, who planted his own gardens, had a plant nursery that has been discovered by archaeologists after digging through many layers of the ground soil. For those excavating the site, this is a chance to touch the sand that ran through Jefferson’s own hands. While the President of today might be out of reach, let us enjoy a peek at the inner life of a President from long ago—one who led this great nation into the superpower it is known as today. Come explore all that Thomas Jefferson loved; visit Poplar Forest’s official webpage here.